The History and Legacy behind the World's First Jewelry Brand

The story of Tiffany & Co., the world’s oldest major jewelry brand, begins in 1837 at 259 Broadway, New York. Founded by school friends Charles Lewis Tiffany and John Barnett Young, Tiffany and Young, as the company was then known, began their business selling small fancy goods and unique items to exclusive clientele.

Like so many love stories when the guy falls for his best friend’s sister…Charles Tiffany would marry Young’s little sister, Harriet, and in 1853 he bought out his partners and renamed the company, Tiffany & Co.  Charles would leave a legacy that created a global phenomenon and arguably the most recognized jewelry brand in the world!

Beyond jewelry, Charles Tiffany responded to the growing desire for luxury goods by selling bouquet holders, purses, Guerlain soaps and fine stationery, some imported from Paris. By 1845 he was advertising ‘French Jewelry’, including items in gold, as well as a wide selection of imitation jewelry aimed at reaching a wider audience.

A Paris branch was opened in 1850, and a year later the firm started a long relationship with the finest watchmaker in the world, Patek Philippe of Geneva. When Mr. Patek visited Tiffany’s in 1855, he left with an order for 129 watches. 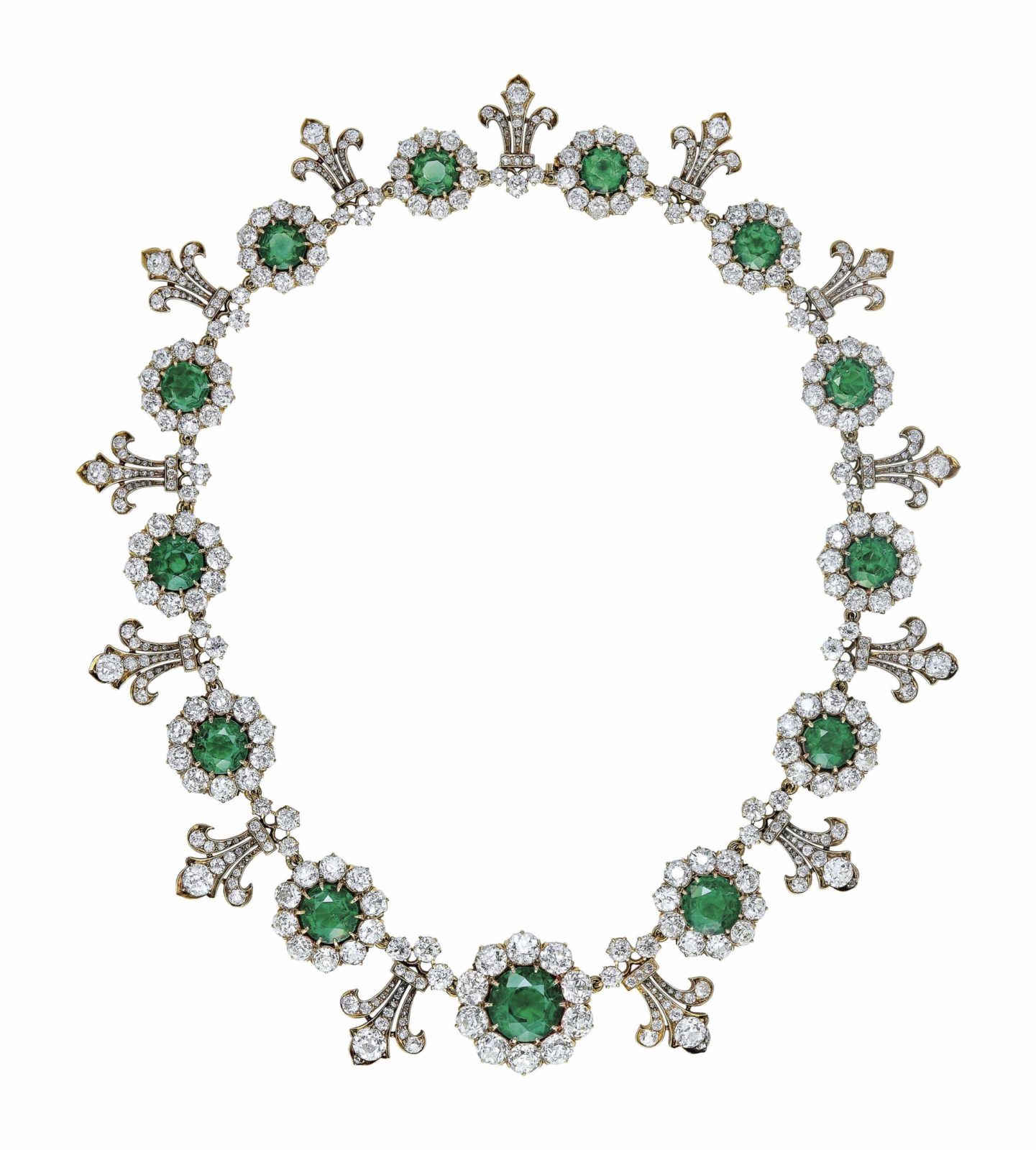 In 1878 one of the most famous sales of royal jewelry took place, when the jewels of Isabella II, Queen of Spain, came to market, and Tiffany & Co. was one of the main buyers.  It may well be that some or all of the emeralds in the magnificent necklace shown above originated from that historic sale.

The firm continued to be a major buyer of royal jewels and spent $487,459 in May 1887 when the French Crown Jewels were sold in Paris. These spectacular historic jewels were eagerly purchased by the new American tycoons who had made fortunes building American industry and finance over the last quarter of the 19th century.

As America prospered during the mid-19th century, Tiffany & Co. expanded, opening a larger shop on Union Square in 1870. As national pride grew in the quality of American workmanship, so did demand for American-sourced gems and pearls.

By the time of the Californian Gold Rush (1848-1855), Tiffany was able to source all of its gold and silver from within the United States — something that appealed to its patriotic customers.

President Chester Arthur commissioned Louis Tiffany in 1882 to redecorate several rooms in the White House, to include new glass windows and a floor-to-ceiling glass screen in the entrance hall. In 1885, he established his own glassmaking firm called Tiffany Glass Company, which in 1902 became known as Tiffany Studios. From 1895, Louis Comfort Tiffany’s famous lamps were being produced commercially, with Clara Driscoll featuring among the firm’s group of talented designers.

Also in 1879, at the Exposition Universelle in Paris, Tiffany & Co. became the first American jeweler to be awarded the Grand Prix for its display of Japanese-influenced silver

in 1934 Tiffany & Co. created the ring that holds the famous Rockefeller Sapphire, measures an astonishing 62.02 carats.  Shaped as a perfect rectangle, this flawless cornflower blue sapphire once belonged to John D. Rockefeller, Jr., who purchased it directly from the last Nizam of Hyderabad.

A year later, Parisian jewelery designer Jean Schlumberger opened his salon at Tiffany’s, and when Breakfast at Tiffany’s, starring Audrey Hepburn, was released in 1961, it proved a powerful advertisement for the company.

Jean Schlumberger (1907-1987) started his career in Paris in the 1930s as a designer of costume jewelry for the renowned couturier Elsa Schiaparelli. By the end of the decade he was creating fine jewelry for a discerning clientele.

In 1939 he joined forces with Nicholas Bongard (1900-1982), and together they opened a jewelry shop at 745 Fifth Avenue. Like many jewelry designers, Schlumberger looked to nature for inspiration, focusing particularly on maritime life in the form of sea urchins and barnacles.

Jacqueline Kennedy became a regular client and is best remembered for her purchase of the Two Fruit clip in rubies and diamonds.

Richard Burton bought his wife Elizabeth Taylor a diamond sapphire and emerald ‘Dolphin Brooch’ by Jean Schlumberger for the premiere of the film The Night of the Iguana in August 1964.

When her collection was offered for sale by Christie’s in New York in December 2011, the brooch realized $1.2 million.

The Timepiece team at Tiffany & Co. created some exclusive collaborations in the watch category.  One notable collection was with Rolex in the 1980s with the iconic Automatic Rolex Oyster Perpetual Datejust, signed Tiffany & Co.

As developer of the trademarked “Tiffany Blue” color, this brand has been able to dominate the bridal category with emotions instantly recognized from their famous blue box.

Tiffany remained in the hands of the Tiffany family for many years, until 1955. One of their shareholders, Harry Maidman, a realtor, had purchased up to 30% of the company. He wanted to sell his shares to Bulova Watch Co., but in order to prevent that, the Tiffany family sold 51% of the stock to the Hoving Corp. In 1978, they were then sold to Avon Products Inc. until 1984 when they were sold to a group of inventors. In 1987, Tiffany went public.

On February 4, 2020, Tiffany & Co. stockholders approved the acquisition by LVMH for a whopping $ 16 Billion in Cash.  The acquisition was reportedly pushed back to October 2020 because of regulatory problems in Australia.  Until then, Tiffany & Co. remains one of the most valuable Jewelry companies in the World.